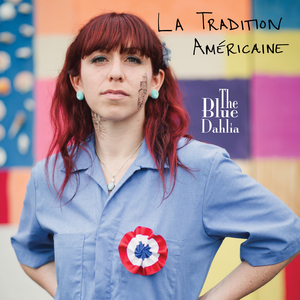 Brooklyn-girl, but a nomad at heart, Dahlia Dumont traveled the world from an early age, always absorbing the cultural and musical influences in her path. Her Eastern European heritage and her years as an anthropology student and teacher in France and Senegal shaped her musical ...

palette, and in 2012 she created her project The Blue Dahlia.

The Blue Dahlia: Lyrics in English and French, French and Mexican accordion, klezmer violin, warm and joyous rhythms of reggae, ska and Latin America, the sensual voice of jazz and French chanson. The music can be heard as an acoustic trio in the intimate bistros of New York and Paris, as well as the electric big band in venues and festivals around the world.

Dahlia's debut album "The Blue Dahlia" was released in 2015. The second, "La Tradition Américaine," is set to release in the August 2018.

Every night, Dumont, the driving force behind The Blue Dahlia, would pop into Barbès, the Brooklyn bar famous for its intimacy and its boisterous global music. Recently returned from several years in France, Dumont was struggling with a new baby, her father’s serious illness, and nursing school.

The music she heard at night inspired her, as did the people she met at the club. “I decided to get some songs down as a demo,” she recalls. Her fellow regulars joined in, and a band was born.

The Blue Dahlia has bloomed in two places at once, on the streets of Paris as well as in New York clubs. The Atlantic-spanning band’s latest album weaves French, Mexican, Caribbean, and Eastern European, American folk and soul elements together into La Tradition Américaine(release: August 10, 2018). Guided by a puckish refinement and gritty ingenuity, Dumont explores the US’s double-faced tradition of welcoming diversity while wallowing in backwater closed-mindedness and mindless devotion to work and money, through a global lens and with collaborators who take everything from Yiddish poetry to pint glasses and chopsticks to make free-thinking, high-spirited songs.

“My influences stem from growing up in New York as a first-generation American, but also from all the musicians that I work with, all the sides of American music out there,” reflects Dumont. “As I was thinking about the song of that name, and then about this album, the notion of the American tradition went in two seperate directions in my head and heart, the dark bigotry and the amazing openness that’s shaped art. We’re highlighting the beauty of the American tradition, the cultural diversity you find in our music,” be that a Mexican-inflected playful French waltz (“Canal Saint Martin”), punk string quartet (“Blah Blah”), or a klezmer meets dub (“Wake Me Up”).

One of those nights at Barbès, Dumont struck up a conversation with an accordionist. It was George Saenz, originally from Laredo, Texas whose band Cumbiagra plays frequently at the club. They became friends, and Dumont approached him about her songs, the product of years of reflection, piano lessons, poetry, and travel.

“I really heard an accordion accompanying my songs,” recalls Dumont. “George was willing to invest in the project, even though I didn’t have much money. He really dug into the songs we began creating together and believed in them.”

Saenz brought his own unique experience to the process, which includes playing with LIla Downs and running Calpulli Mexican Dance Company. Just as Dumont invited Saenz into her world, he began drawing her into his. “I’ve started to feel that music, and it’s incorporated into my music and my life,” she says. “I’ve had the luck to listen to and play Latin music through jam sessions and concerts. We also both love to play around with soca and dancehall rhythms.”

Saenz and Dumont also connected with fellow club-goer Japanese-born, New York-based bassist Yoshiki Yamada, who became a friend and musical partner in crime. “The New York band today has grown and there are some newer faces,” says Dumont, “but Yoshiki, George, and I are the heart.”

The Blue Dahlia also has another, French side, a whole other band that influences Dumont’s writing and arranging. Dumont discovered the musicians who would become the core of this iteration of the band when seeking France-based musicians for a French tour. They clicked, and the band grew to embrace players as diverse as its American version, a trombonist from Reunion, a drummer with roots in Morocco.

No matter which side of the Pond it’s on, The Blue Dahlia builds songs by bricolage, by finding elements that work together, juxtaposing and repurposing them. Dumont loves to try new ways to perform older material, coming back to songs and adding new arrangements. The romantic “I See Trees Differently” found a deeply American folk form, and also a more reggae-inspired form. Both needed to happen, Dumont feels, and both made the album. ‘Le rȇve’ is a recreation of a song on the previous album,” explains Dumont. “The way my French band played the song was so different and cool. I wanted their touch.” The song’s rhythm section and vocals were recorded in France, with overdubs in the US.

That scrappy urge to put things together, like the sand painting of the American flag that graces the album art, guides Dumont in her songwriting and collaborations.  It shaped the way La Tradition Américaine  was recorded, in sessions that leaped the Atlantic. There’s a seat-of-the-pants spirit, characterized by the impromptu instruments snagged by Argentine drummer Lautaro Burgos, who used pots, pans, pint glasses, and chopsticks (heard on “La Tradition Américaine” and “Your Love”) to expand the percussion palette.

Yet the diversity never drowns out the harmony and the grooves Dumont and company find in their multiple sources. The layers of voices, recorded on two continents, speak to this. One of the most telling and compelling moments on the album comes during the bridge of “Wake Me Up,” a Yiddish poem recited by Dumont and French band members in chorus, an exploration of Dumont’s Eastern European roots. “It’s is a big choir-sounding 3-part harmony of a Yiddish poem by French klezmer singer Eléonore Biezunski, who was inspired by one of my songs,” Dumont says. “It’s a powerful point in the song. But more than that, it’s true the Blue Dahlia, our international family.”